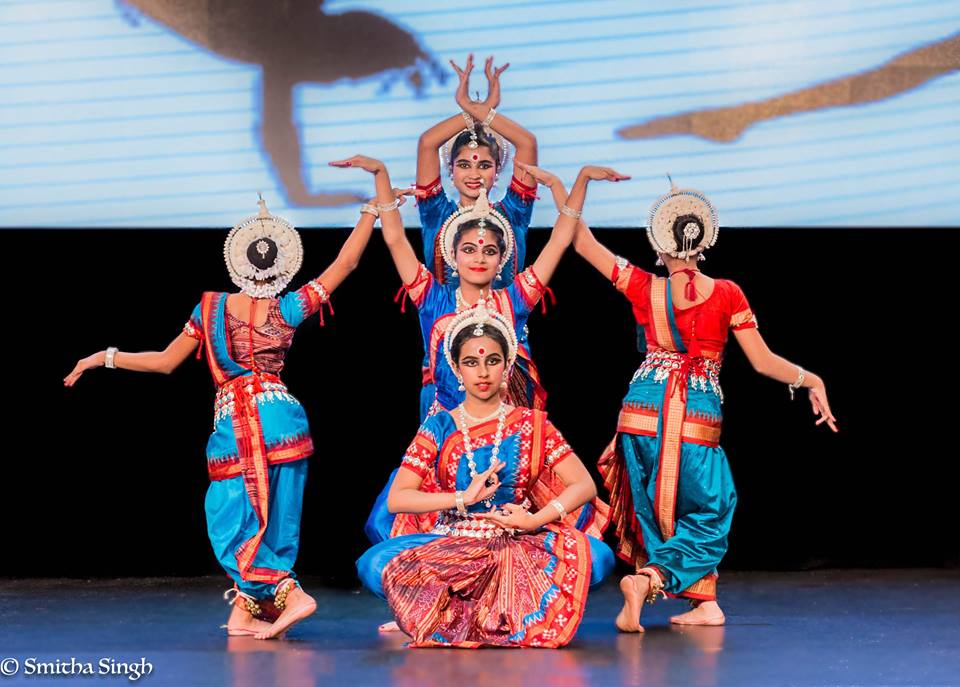 Odissi is an Indian classical dance form that originates from the state of Orissa that has spread all around the world. This form is the oldest Indian classical dance form according to archaeological records found in the temples of Puri, Orissa, and elsewhere. It is one of the eight classical dances, and the second most popular classical dance in India. One of the distinguishing features of Odissi is Tribhangi. It means three (tri), and folds of body (bhangi). A dancer performs with three distinct curve/folds on their body at neck, chest, and pelvis. Another important dance pose or orientation is chauka (means square). This position resembles the Hindu God Lord Jagannatha.

There are several dance vocabulary and repertoire in Odissi.
Mangalacharan
An invocation piece. After praying Lord Jagannath a shloka (hymn) in praise of some other deity is sung, and expressed through dance. Mangalacharan encompasses the Bhumi Pranam (salutation to Mother Earth) which is asking for forgiveness to Mother Earth for hurting her with the dance steps and the Trikhandi Pranam ( the three-fold salutation) – above the head- to the Gods, in front of the face- to the gurus and in front of the chest- to the audience.

Batu
Also known as Sthayee Nrutya or Batuka Bhairava (Furious Dance) is dedicated to Lord Shiva- the God of Dance. It is one of the 64 furious-aspects of Lord Shiva known. ?The origin of dance is believed to be from Tantrism that had flourished in Odisha in the earlier days.

Pallavi
Pallavi literally means “blossoming”. A pure dance item which depicts a raga through eye movements, body postures & intricate footwork. This dance form has a distinct not only for the dance, but also for the accompanying music.

Abhinaya
An dance form where there is an enactment of a song or poetry, and the story is conveyed to the audience through mudras (hand gestures), bhavas (facial expression), elaborate eye and body movements. The dance is fluid, very graceful, and sensual.

Moksha
Like its literal meaning it is the concluding item of a recital. Moksha means “spiritual liberation”. It embodies the spiritual culmination for the dancer who soars into the realm of pure aesthetic delight.